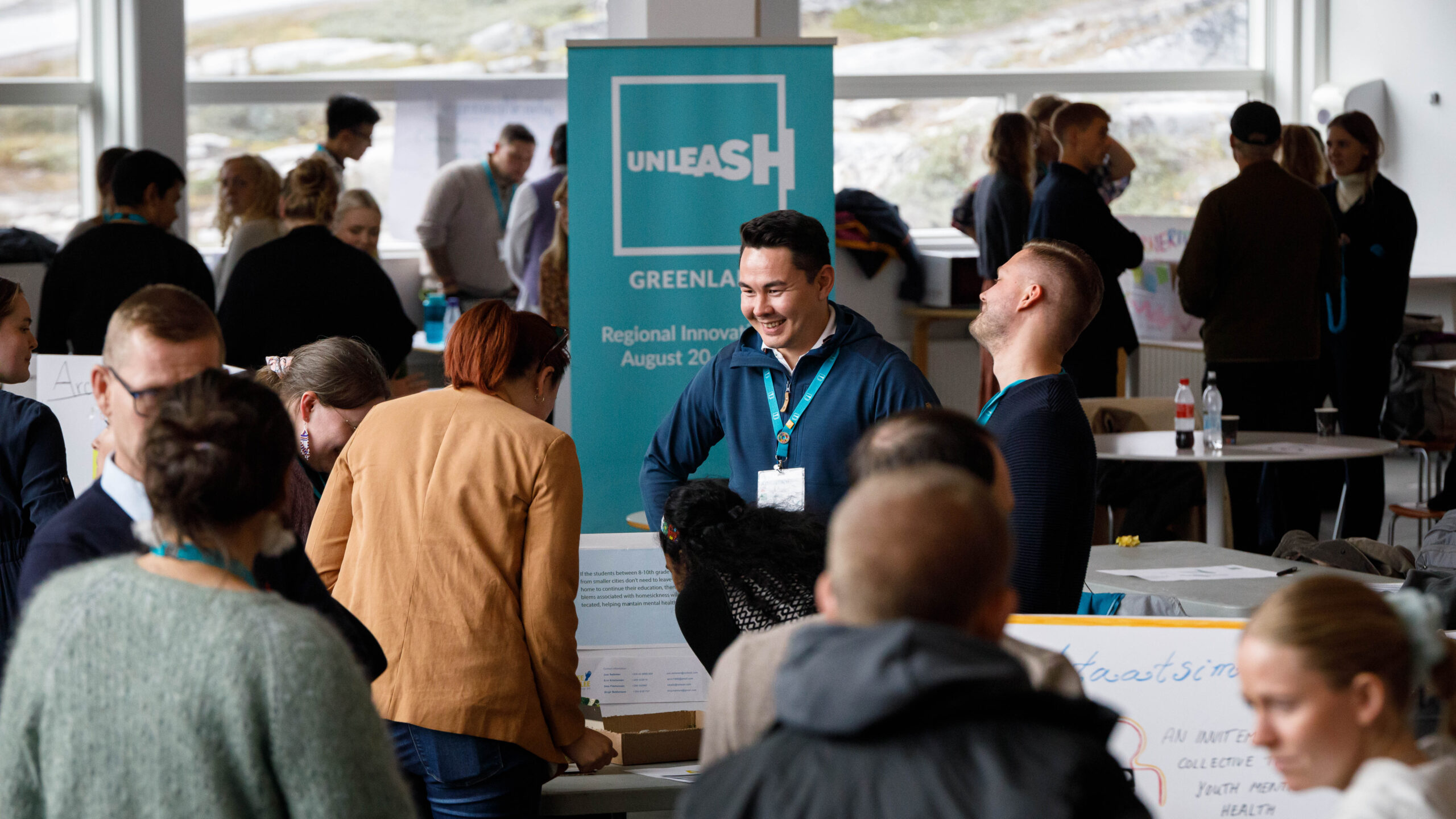 For one week, 200 young people were together in Nuuk to come up with innovative solutions to challenges we experience here in the Arctic.

Ghost nets that lie on the bottom and fish on, never being picked up. Lack of local educational opportunities. Long distances between towns and villages. These are some of the challenges we face in Greenland.

Challenges that 200 young people from the Arctic and Nordic region have worked on to solve with innovative ideas.

It is the global non-profit organization, Unleash, which has held the Innovation Lab in Nuuk during the days 20 – 26 August, to develop solutions within three topics: Education, health, including mental health and biodiversity and climate change. All these topics have something to do with the UN’s global goals for sustainable development until 2030. Unleash has selected 200 young people aged 18-35 from Nunavut to Finland.

The young people’s group work on innovative solution ideas was fine-tuned and fully developed enough for them to be presented on a large stage at the university, Ilisimatusarfik, in front of judges and a large audience.

Two groups made a particular impression on the judges. 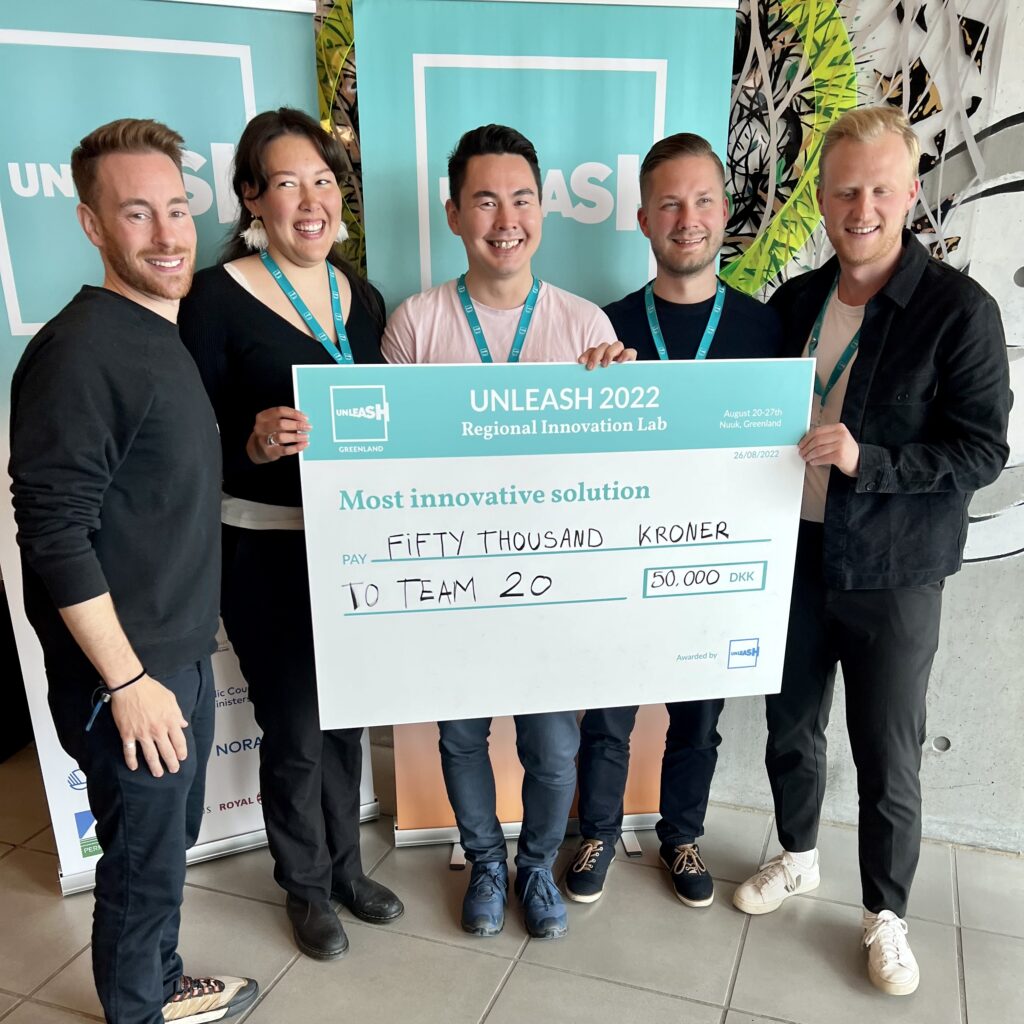 Simple solution to a big problem

Team 20 won the prize for having the most innovative solution, with a prize of DKK 50,000.

Their project is about distance learning. There is a great need to get more people into education in Greenland. But many young people in Greenland may be forced to move from village to city in order to complete their secondary school leaving examination. It can be hard for some who move away from their safe and homely surroundings.

Team 20’s solution idea is a two-part model, where a qualified teacher together with a local teacher, in a settlement for example, collaborates by offering distance learning to students so that they can complete their primary school without leaving their homes.

This is what Josi Seilonen from Finland says, who spent a week in Nuuk and developed the idea.

– We realized that there is a big problem with children of a certain age having to move from their home to continue their primary school education, and we wanted to solve that. It shouldn’t be impossible. We talked to a lot of experts and people who have had to leave home and move to another city to live in a dorm room.

– We can be part of the Unleash Plus program (incubation program for solutions), so we can start trying it out and implementing it. I see it as something that really needs to be done.

– I believe that this can also be scaled to other countries, e.g., with help from the various UN organisations, says Josi Seilonen.

Another group, which won the prize for the most scalable solution, has an idea to use human poo and urine for local food production. With the catchy name – Loopoop, the group wants to build greenhouses and produce vegetables, such as potatoes and carrots.

– What we are basically looking at in our solution are cold greenhouses, we are not thinking about tomatoes, salads or strawberries, we are thinking about carrots and potatoes, says Hörn Heiðarsdóttir from Iceland.

In many smaller towns and villages, plastic wastebags are still used. And those wastebags can be polluting for nature. In addition, it is not a pretty sight to see a lot of wastebags lying by the waste depot, because it can take a long time before they are picked up for further incineration. Part of Loopoop’s idea is that households use biodegradable bags.

The current situation in many remote Arctic communities is unsustainable and not environmentally friendly, with human waste being left out in nature or dumped into the ocean in plastic bags, says the team.

The Loopoop system begins in the bathroom where the urine and feces are separated through a passive addition to the existing in-house facility. The separated human waste is then moved to a local composting and processing site where the poo and pee are processed. The urine is converted into fertilizer and the feces are turned into soil.  The soil and fertilizer can then be used for local food production.

It may not sound so delicious, but it is a very normal method in the agricultural industry, as it is rich in nutrients that crops benefit from.

Last year, naalakkersuisoq for the environment, Kalistat Lund (Inuit Ataqatigiit) stated to KNR that they will investigate solutions to abolish the use of wastebags. According to nationwide figures from 2019, there were 5,240 households that still used plastic wastebags. Here, almost half were in Avannaata Kommunia, with 2,456 households using wastebags.

Arctic perspectives are seen and recognized

NAPA, the Nordic Institute in Greenland, has supported Unleash with DKK 200,000. The project is helping to put Greenland and the Arctic on the world map, which pleases NAPA’s acting director, Nina Paninnguaq S. Kristensen.

– At NAPA, we are proud to support such a large and successful event, which helps to set the course towards a more sustainable development in Greenland. We followed the event and were touched to see how passionate the young people were to find good and innovative ideas, especially in the area of children and young people.

– We would like to thank Unleash for facilitating this much-needed focus area. In NAPA, we also work to ensure that the Arctic perspectives are seen and recognized and Unleash has helped to support that to that extent, says Acting Director, Nina Paninnguaq S. Kristensen. 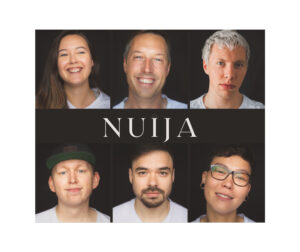 The new band, Nuija, is currently recording their debut album with the support of NAPA. Band member Magnus Biilmann Trolle talks about the band and gives tips for new musicians. – NAPA as a cultural fund is clearly the best option in Greenland in relation 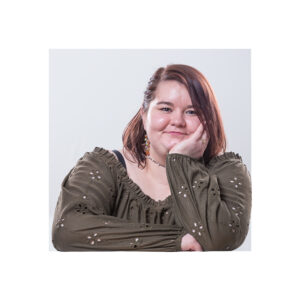 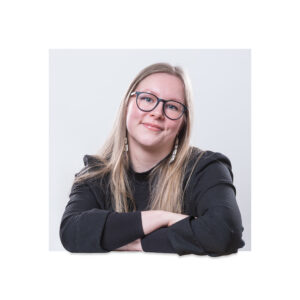 Ready and set to advice

NAPAs advisor is now in place. Pauliina Oinonen has taken her place, and she is ready to show what she can do! Our advisor arrived despite the winterstorms of January 2022 – but a whole week later. Pauliina is originally from Finland, but she has 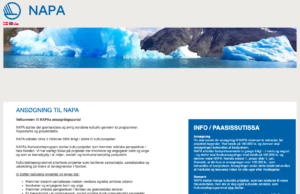 NAPA has just launched a new website and new application module for their Cultural Support Program. Shortly afterwards, the first application for support landed: A project concerning a creative workshop for children and young people in Ilulissat and Maniitsoq. With the new application system, it